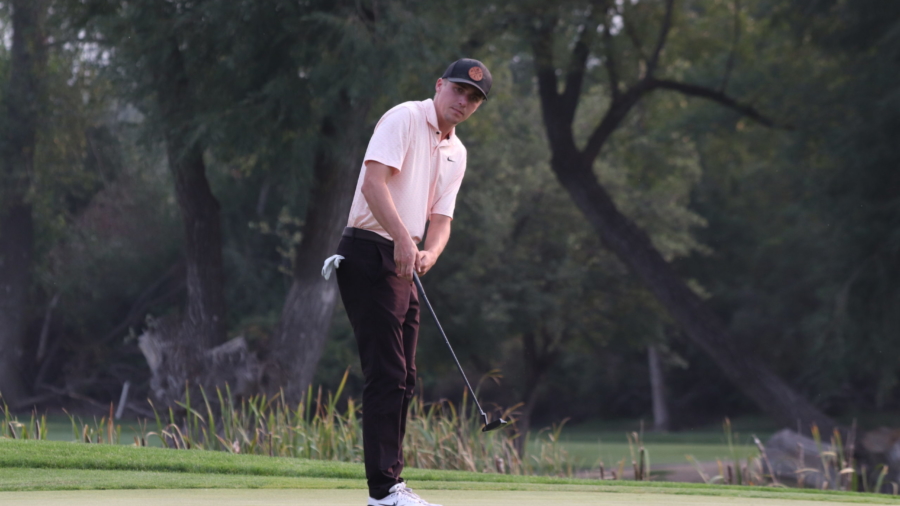 Not only was it his first victory as a pro, but the win earned him a ticket into the Assistant PGA Professional Championship on November 11-14 at PGA Golf Club’s Wanamaker Course in Port St. Lucie, Florida.

“I just had a good feeling with my putter today, didn’t really try to change anything mechanically and visualize the putts. I had the speed down so I just trusted it all day,” Leddy said

“I’ve played the course before in college,” Leddy said about PGA Golf Club, “so I’ll just try to go out and put some good numbers up and compete with the best.”

Leddy finished one-stroke ahead of Red Ledges Pro Aaron Purviance, who earned exemption into the 2021 Assistant Championship based on his play in last year’s event in Florida, so the other qualifiers include Eagle Mountain Assistant Pro Chase Hansen and Clint Godfrey, who earned his spot in a playoff against defending champion Thomas Cook.

Best of luck to our Utah Section assistant professionals as they compete on the national stage. 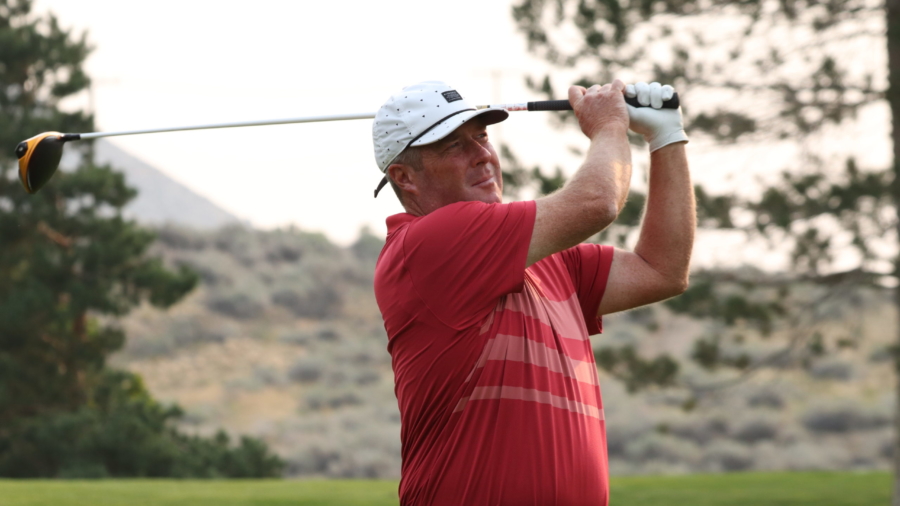 With rounds of (-9) 67-66, Owen’s victory qualifies him for the 2021 Senior PGA Professional Championship, which will be played at PGA Golf Club October 21-24 on the Wannamaker Course.

“I didn’t do anything crazy,” Owen said of his final round. “I made zero fives on the card, so I took care of the par fives. It was a stress-free round: just hit it, go get it and putt it. Playing with Joe (Summerhays) the last couple of days and watching a really good putting stroke was really fun. That guy putts the ball like you should putt the ball. Every putt seems to have a chance to go in.

“This is the first time qualifying for me, just looking forward to playing as good as I have the last few weeks. The courses are a lot different than home, but a little practice and we’ll see what happens.”

Other qualifiers for the Senior PGA Professional Championship include Summerhays, who actually had the low score of the tournament at (-12) 63-67 but is still 49-years old for a couple more weeks, making him ineligible for the Senior Section Championship, but able to qualify for the national event in October.

Park City’s Jeff Brehaut qualified and Bloomington’s Scott Brandt earned the last spot by one stroke over Paul Phillips, who lead the first round, and Ryan Rhees. 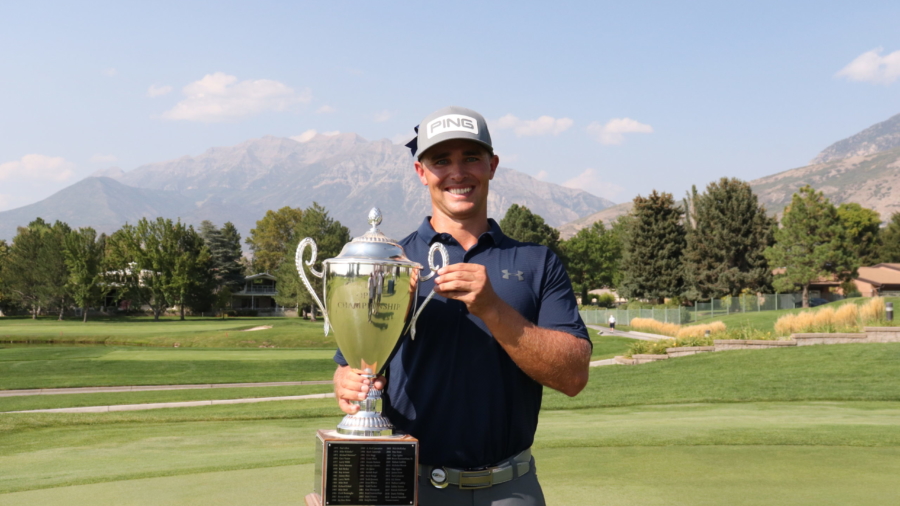 One swing with a 7-iron Sunday afternoon radically altered Derek Fribbs’ story of the 2021 golf season.

Fribbs posted 66-63-64 for a total of 23 under par, three shots better than Idaho pro T.K. Kim, earning a $20,000 check and a nice 31st birthday (Monday) present for himself a year that otherwise was memorable for the wrong reasons.

“At least, I’m the good guy in the story,” he said good-naturedly, when the fight during a Korn Ferry Tour qualifying event came up during the winner’s news conference. “I wasn’t beat up or arrested.”

The double eagle will have its own place in Utah pro golf lore as a highlight of a weekend when BYU golfer Kerstin Fotu of Alpine became the first woman to play the final round of the Utah Open, an event first staged in 1926.

“Honestly, I’m pretty proud of myself,” said Fotu, who received an exemption into the tournament as the Utah Women’s Open champion and shot 1 under par for two rounds before adding a 76. “I wanted to make the cut, and that’s what I did. It’s super motivating to see some things pay off that I’ve been working on and also to see what I need to work and sharpen up going into the fall season.”

After all he has achieved in Utah amateur golf and as a PGA Tour player, Daniel Summerhays of Fruit Heights also made a strong showing with a closing 65. In his first Utah Open appearance, Summerhays tied for third at 17 under with Matt Marshall, who settled for an even-par 72 after a 62-65 start.

“The second round killed me.” said Summerhays, who shot 63-71-65. “I knew I was going to have to be in the 20s [under par] to have a chance. … I was definitely frustrated [Saturday]. I mean, it would be pretty cool to have my name on the Utah Open trophy.”

BYU’s Cole Ponich of Farmington rode a 65-67 weekend to low-amateur honors at 13 under, tying for ninth place overall. Host pro Chris Moody tied with Tommy Sharp as the top-performing Utah Section PGA member at 10 under, earning $1,400 bonuses as they tied for 14th.

CBS Sports football analyst Tony Romo, the former Dallas Cowboys quarterback, tied for 42nd place at 4 under, finishing 11th among the amateurs with a 73 on Sunday. Romo earned a $180 merchandise credit in the Riverside golf shop to supplement his $17 million broadcasting salary.

Fribbs was thrilled to pack his oversized, cardboard check into the back of Zahkai Brown’s vehicle for the ride home to the Denver area. Brown, the Utah Open’s winner in 2016 and the low pro in ‘17, has turned this event into steady income. He tied for fifth Sunday, earning $5,500.

Picking places to play for golfers without any PGA Tour-brand status is a matter of “convenience,” Fribbs said, along with economics: “You don’t want to spend a lot of money to win a little bit of money.”

Fribbs’ money shot was timely, considering how Kim had just holed a 42-yard pitch shot for an eagle on the par-4 No. 14 to get within one stroke.

“I thought it was ‘Game on,’ ” Kim said. “I felt confident, until he made that albatross.”

Yeah, that “2” changed everybody’s outlook. “I was just telling myself to keep doing what I’m doing,” Fribbs said. “It worked for 50 holes, so I might as well keep doing it.”

That 51st hole will be the one he remembers for a long, long time.

During the post-tournament ceremony on the 18th green, a moment of silence was observed for Mike Stanger, a former Utah State golfer in the mid 1980s and a longtime golf manufacturer’s representative, working with Utah Section PGA professionals. Stanger’s sons, Brock and Dalton, were playing together in Friday’s first round when they were informed of their father’s death.

Devin Dehlin, the Section’s executive director, became emotional as he spoke of a “melancholy day” framing the tournament. Dehlin also cited the observation of Dean Wilson, a former BYU golfer and PGA Tour player, who returns annually to Riverside and was this year’s low senior, tying for 11th place. Wilson labeled the event “a celebration of Utah golf.” 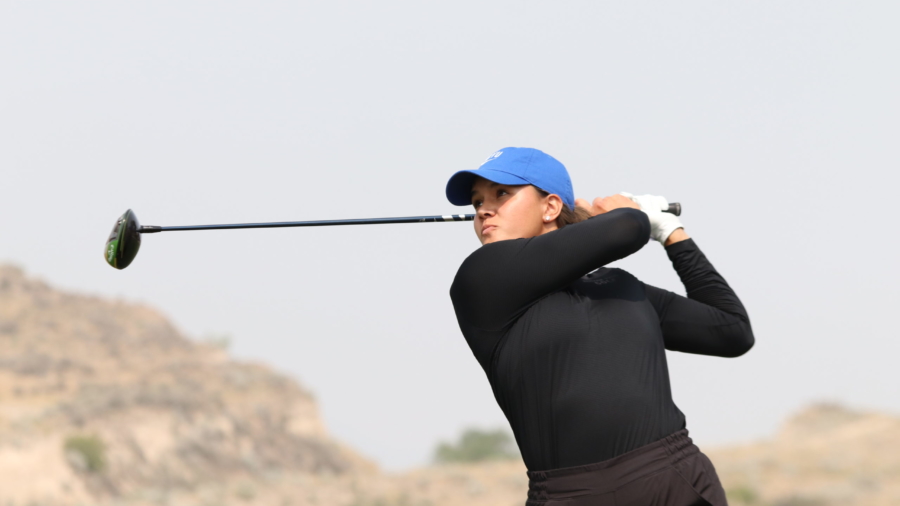 BYU golfer Kerstin Fotu hardly played like a former champion in this summer’s Women’s State Amateur, barely advancing to match play after posting an 83 and then losing convincingly to teammate Lila Galea’i in the first round in Farmington.

Fotu’s performance in the fifth annual Siegfried & Jensen Utah Women’s Open was an entirely different story. She became the third collegiate winner in a row, covering the event’s Thanksgiving Point Golf Club era. Fotu overtook California pro Gabrielle Gibson on the back nine Tuesday, posting 69-68 for a 7-under-par total and a one-stroke victory.

Fotu quickly overcame her State Am showing by going to California and shooting a 66 to qualify for the U.S. Women’s Amateur. She failed to reach match play at Westchester Country Club in New York (where Blair won a first-round match), but Fotu looked good at Thanksgiving Point, the course she primarily grew up playing.

Her iron game was especially sharp this week, with solid ball-striking and improved distance control. “That was something that really killed me at the State Am,” she said, “just [not] being able to score.”

Fotu thrived on Thanksgiving Point’s back nine, playing those holes in 5 under par for two days, while the rest of the field struggled with the wind. “I just tried to learn from last year,” she said, “because last year the wind kind of got in my head and I didn’t play as well. I just tried to club up and swing easy, and that helped my ball flight.”

Gibson’s one-stroke lead remained intact through Tuesday’s front nine, but then she made her first bogey of the tournament on the par-4 No. 10. Fotu birdied that hole to move ahead, and added another birdie on the par-4 No. 12.

In what became a two-woman duel, Fotu’s lead was cut to one stroke when she bogeyed the par-5 No. 14, but she recovered with a birdie on the par-3 No. 15. Gibson birdied the par-4 No. 16, only to have her tee shot barely clear the Jordan River on the par-3 No. 17, leading to a bogey.

With her two-stroke lead restored, Fotu was able to absorb Gibson’s birdie on the par-4 No. 18 – not that she was sure where she stood in relation to players in the groups ahead of them, even with on-line scoring updates available.

She liked how it all turned out, though. Fotu followed San Francisco’s Annika Borrelli and UNLV’s Veronica Joels as amateur winners of the Utah Women’s Open, after current BYU assistant golf Lea Garner took the first two titles in Provo. Garner also was the low pro in 2020; Gibson is the first out-of-state pro to claim the tournament’s biggest check.

And while Garner came close to winning the State Am, Fotu has a place in history as the first champion of both tournaments.