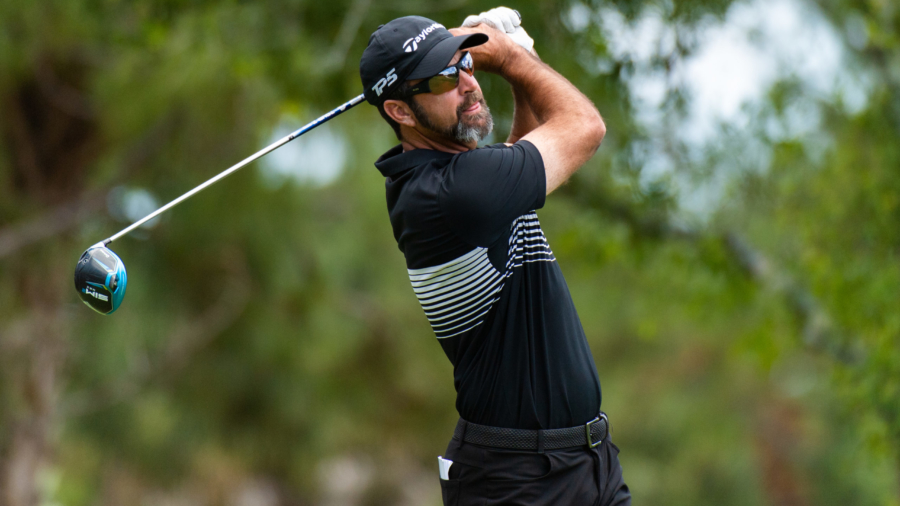 Every golfer dreams of playing in golf’s Majors, even PGA Professionals. For Eagle Lake Golf Course Director of Instruction Joe Summerhays, he’s been there before and heading in comfortable and confident his second time around.

“It is very satisfying,” Joe said of qualifying again. “One of the things that I’ve learned over the years is to enjoy the good times in your golf career because there are a lot of down times as well. To qualify for the PGA this year is one of those good times. I will enjoy the experience for sure.”

Summerhays needed par on the 18th hole of the PGA Professional Championship to qualify without playing in a playoff. His drive found tree trouble, but with a gap in the trees and a precise iron shot, he hit the green and two putted his way in.

In between his first Major appearance and his next, he’s won several Utah Section events, including 2020’s Utah Section Championship, earning the Utah PGA Omega Player of the Year award.

“I hope to enjoy the experience this time around, be comfortable, confident and treat this tournament as an opportunity that doesn’t come around often,” he said. “Golf wise, I hope to treat it just like any other tournament I play in. A good shot in golf requires a good mental state. I hope to continue to do the things I’ve been doing, as far as my routine, so I can play the best I can – one shot at a time.”

Summerhays will be the 10th Utah Section PGA Professional in the last eight years to compete in the PGA Championship. 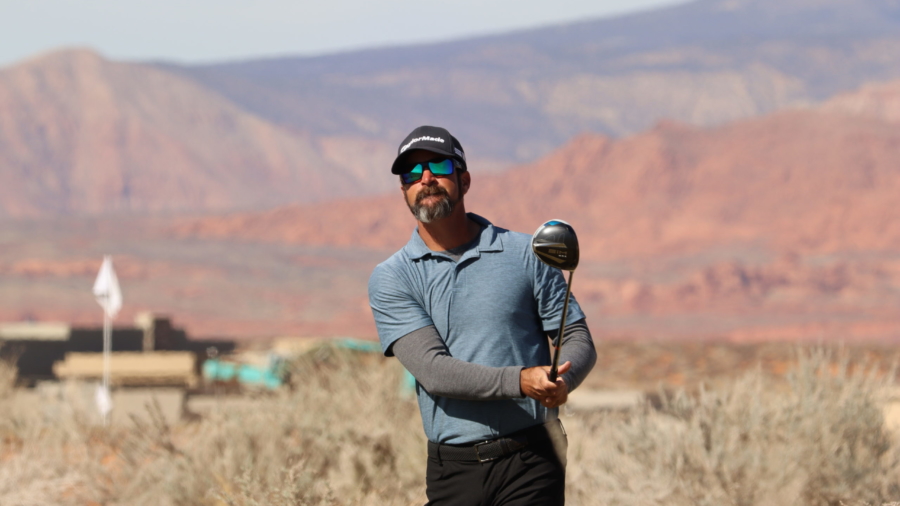 The Utah Section PGA will be well represented with nine Section members competing in the 2021 PGA Professional Championship on April 25-28 in Port St. Lucie, Florida at PGA Golf Club.

Among the qualified Section pros competing in Florida is 2020 Utah PGA Omega Player of the Year Joe Summerhays.

“My game is in good shape,” said Summerhays. “There are several things I like about the PPC. Usually the courses are fun to play and the overall feel of the event. It feels like a big event.”

The top 20 finishers will move on to Kiawah to play in the PGA Championship with the best golfers in the world.

Each round of the 53rd PGA Professional Championship will be broadcasted on the Golf Channel.

Best of luck to: 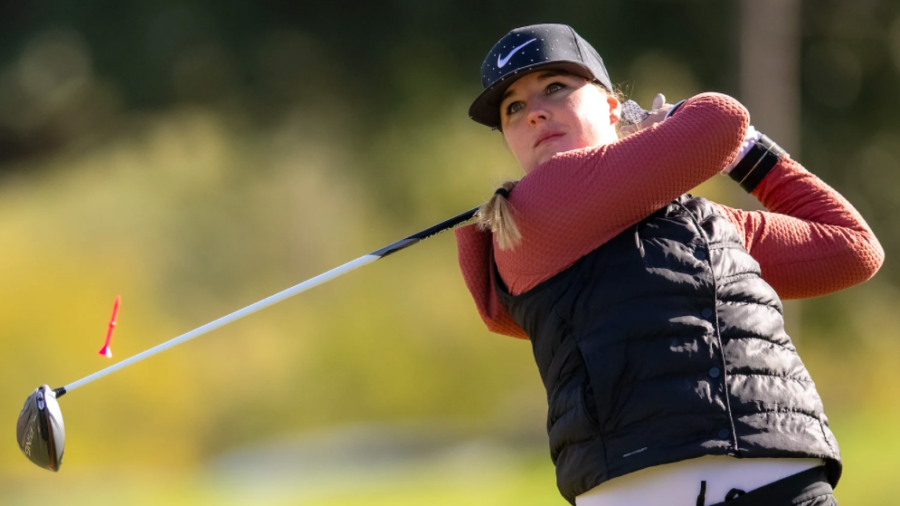 Road to the LPGA

When she joined the BYU women’s golf program as a non-scholarship player from North Carolina, Kendra Dalton (cover photo) was not a likely LPGA Tour prospect.

Here she is, though, closer to reaching that level than any former Cougar since Carrie Summerhays Roberts, now BYU’s coach, who qualified for the LPGA Tour nearly 20 years ago. Dalton is an established player on the Symetra Tour, which is staging the inaugural Copper Rock Championship this week.

The event is a homecoming for Dalton and Haley Sturgeon, a Dixie State University graduate who received a sponsor exemption to compete for the $200,000 purse Thursday through Saturday at Copper Rock Golf Club in Hurricane.

As the fourth of 20 tournaments in 2021, the Copper Rock Championship is another opportunity for Dalton to move up the money list. She’s 3 for 3 in making 36-hole cuts and, while her final rounds could be better, she likes the way she’s playing.

Dalton won consecutive tournaments on the Cactus Tour in Arizona in February, when some members of both the LPGA and Symetra Tours were preparing for their seasons. Those performances reflected the work she has done with Milo Lines, a former Utah Section PGA member who’s now teaching at Superstition Mountain GC in Arizona.

“My game’s really good and I’m excited to play the whole year and I feel good about moving on and getting (LPGA) status,” Dalton said.

That would require finishing in the top 10 on the Symetra Tour money list; Dalton is No. 27 through three events.

Sturgeon was thrilled when John Horton, Copper Rock’s head PGA professional, awarded her the exemption into the Copper Rock Championship. As she said in February, after Horton delivered the news on the driving range during the Utah Section PGA’s Winter Classic, the exemption “kind of just seemed like a far-fetched dream when I first asked John about it.”

Sturgeon, who works as an assistant pro at The Country Club of Salt Lake City, is making her first Symetra Tour appearance. “Hopefully, it’s not my last,” she said.

The Korn Ferry Tour, the men’s equivalent of the Symetra Tour, offers a spot in the next event to any player who finishes in the top 25. In Sturgeon’s case, she would have to win the Copper Rock Championship to gain any status. She’s embracing that opportunity, while eager to see how her game compares.

Here’s a good sign: Sturgeon finished solo fourth in the Cactus Tour event that Dalton won in a three-way playoff with two touring pros in Queen Creek, Arizona. That performance showed her that “I can compete with those girls, even though I don’t have status, and knowing that I belong here,” Sturgeon said.

Dalton is a BYU success story, having improved every year of her stay in Provo. She was known for consistency, finishing in the top 20 in 29 of 45 events for the Cougars. In her final three years, she won three tournaments and finished second seven times. She helped BYU reach the NCAA Championships as a sophomore in 2016, the same year when she beat teammate Lea Garner in the final match of the Women’s State Amateur at Victory Ranch.

And in 2018, she turned pro and immediately qualified for the Symetra Tour, via the LPGA Tour Qualifying Tournament. She made 21 starts in the 2019 season and finished 56th on the money list with $20,185. That showing became even more significant when the COVID-19 pandemic reduced the tour’s 2020 schedule to 10 events, while every player’s status was frozen through 2021.

In essence, golfers’ 2020 earnings didn’t matter, as everyone started over this season. That helped Dalton, who expects to thrive in her third year. “I know what the travel is like, I know a lot of the golf courses, I know how the tour kind of runs,” she said. “And all of it’s a little bit overwhelming your first year, because it’s so different from college golf; you’re kind of out there on your own trying to figure it out. So that definitely is a nice thing, to feel a little more at ease.”

Sturgeon hopes to feel comfortable in the Copper Rock Championship. She has done everything she could to prepare for her Symetra Tour debut, traveling to Hurricane several times in the past two months.

The former Haley Dunn is married to Davis Sturgeon, who she describes as “my kindergarten sweetheart.” She’s working steadily toward PGA membership, while trying to maximize her playing ability.

Before focusing on golf, Sturgeon was a high-level junior ski racer and a Layton High School cheerleader known as the “tumble queen.” Injuries led her to give up ski racing, and she considered cheerleading in college before pursuing golf at Utah Valley University and then Dixie State.

Sturgeon won two Pac-West Conference individual titles for DSU, helping the women’s golf program get established. She pointed to those St. George-area ties in asking for the sponsor exemption, and she’s determined to follow through with a good showing in the Copper Rock Championship. Dalton and Sturgeon are part of featured pairings in the first two rounds, as announced by the Symetra Tour. Dalton will tee off at 8:47 a.m. Thursday, playing with Rachel Rohanna and Gigi Stoll. Sturgeon plays at 12:05 p.m. with Katelyn Dambaugh and Sophie Hausman. 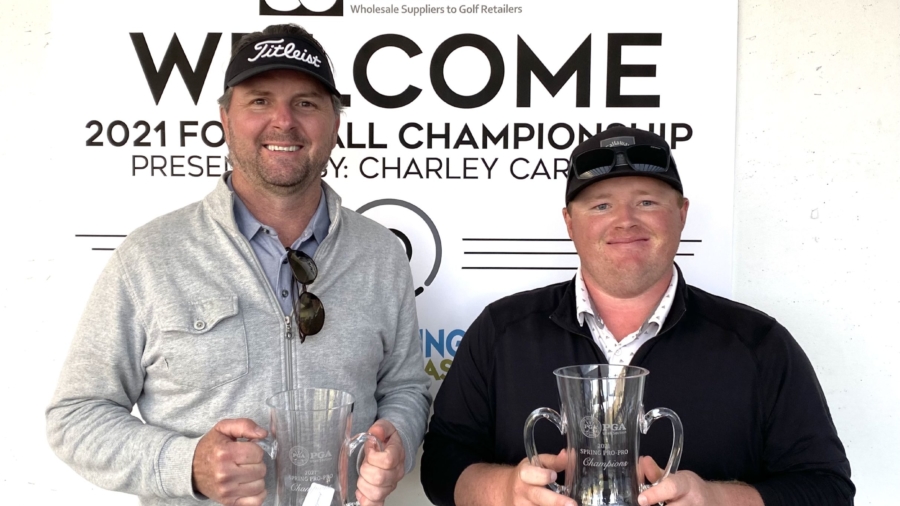 Not only did they win the championship but they claimed the second seed in the 2021 Utah PGA Four-Ball Championship, behind 2020 champs Chris Moody and Mark Owen of Riverside Country Club and Mountain View Golf Course, who automatically claimed the top seed.

“I’ve been working really hard at it for years,” Barton said of his first professional win. “But to get it done with Chris was really fun. Everything just came together and to start the season with a 65 and a win, feels really good.”

Barton shot a (-7) 65 on his own ball, a new tournament personal record for the PGA associate.

“I can remember coaching Joe in high School at Manti while I was the Head Professional at Palisade,” Stover said. “Joe was so good yesterday that I kind of felt like I was coaching him again versus being his playing partner.

“It was a fun way to end my time as his boss at Wasatch, and just like yesterday on the course, the student has become the teacher. Joe has a bright future in golf and I’m proud of him!”

Immediately following the completion of the Spring Pro-Pro, the first round of the season-long Four-Ball Championship began. The top 32 teams of the morning round advanced to match play.

Stover and Barton continued their hot play with a 5 & 4 win over Lynn Landgren and Brad Stone in the round of 32.

Number-one seed Owen and Moody also advanced to the round of 16 with a 5 & 4 win over Nate Olson and Tyler St Jeor.

Thank you to Bob Wallis, Craig Sarlo and the Ogden Golf & Country Club staff for hosting the Section membership for the day and thank you to Charley Carlson of JC Golf Accessories for sponsoring the event and supporting the Utah PGA. 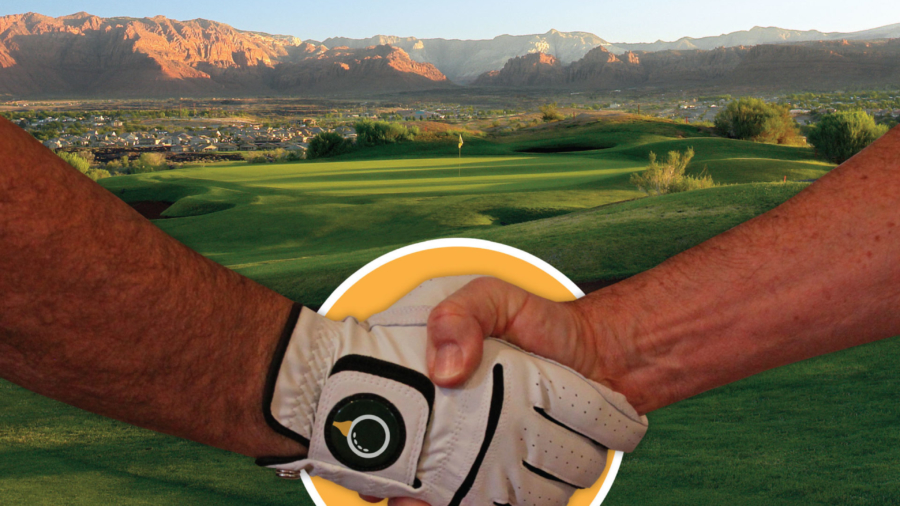 Utah is for outdoor enthusiasts, no one knows this better than golfers. Set amongst the state’s natural wonders and wide-open spaces, Utah’s golf facilities, both privately and publicly owned, now more than ever, represent more than just a recreational pastime. Golf is a key industry contributing to the vitality of Utah’s economy.

That’s an industry worth growing and protecting. Click here for more information: http://bit.ly/GolfAllianceUtah 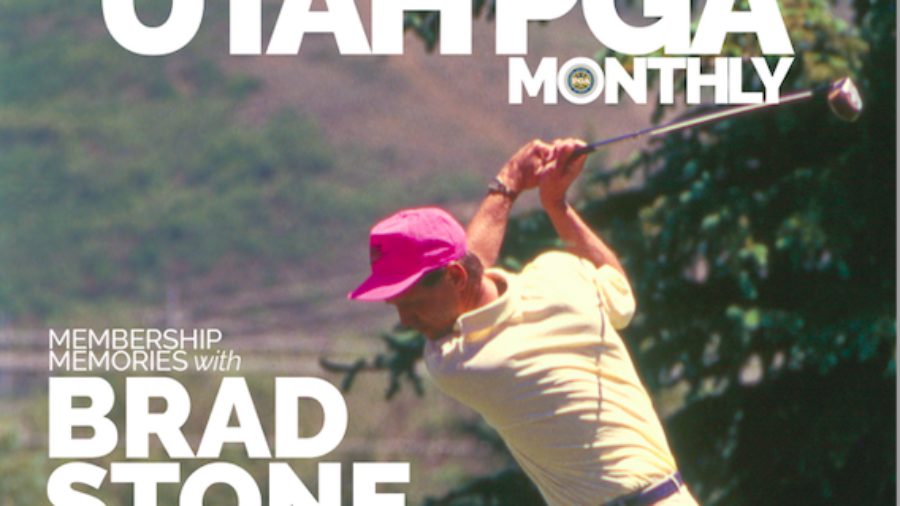 In this issue we catch up with newly-retired Davis Park Head Professional Brad Stone, Timpanogos Head Professional Brett Watson, we meet some new faces in The Hideout Golf Club’s Jeff Simon & Toana Vista’s Charles Clinton and play This or That with Park Meadow’s Eric Johnson!