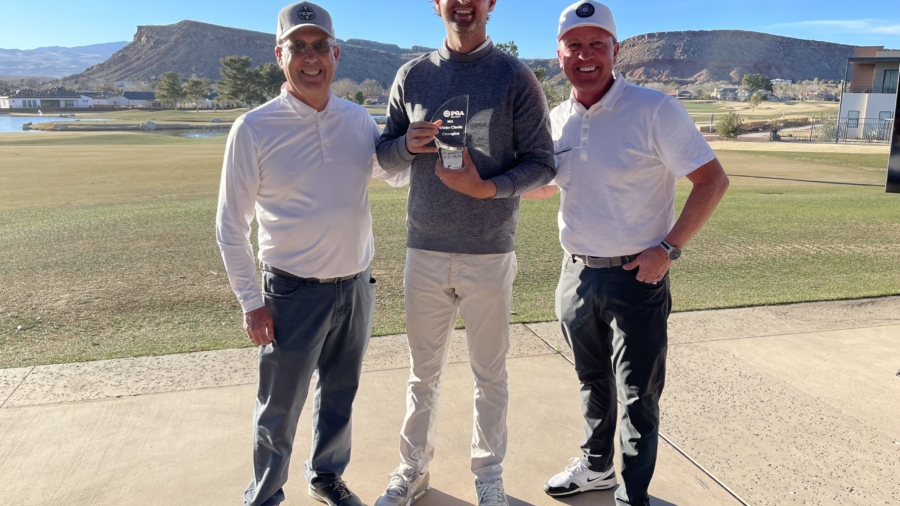 The RMT/EZGO Winter Classic in honor of Mike Stanger and supported by Under Armour was the perfect way to kick off the 2022 Utah Section season with three rounds of golf, the annual Awards Banquet and the Annual Meeting – bringing Section members together to start the year.

After a warm-up scramble round at The Ledges to shake off the rust, two Stableford championship rounds were played at Southgate Golf Course and Bloomington Country Club, where familiar names would top the leaderboards.

In the regular division, Davis Park Head Professional Zach Johnson took command of the tournament in the final round with a (-6) 66 that included two eagles, four birdies and two bogies.

“I had a good stretch on our first few holes,” Johnson said.  “I birdied 15, eagled 16 and birdied 17. I hit it out of bounds on 18, which was disappointing, and made bogey. Then I got up on hole one and eagled, so our first 8-9 holes I had three birdies and two eagles.”

That strong stretched propelled him from being three-points behind first-round leader Matt Baird, who finished third with 83 total points. Johnson finished with 95 points and reigning champion Casey Fowles finished runner-up with 86 points.

“The beginning of the year for me has been a struggle mentally and physically with two injuries, but now I’m recovering from those and my game is starting to come back,” Sturgeon said. “No bogies today, two birdies, missed an eagle putt, but was putting solid. I drove the ball well, irons were decent, but my putting made it easy.”

Sturgeon plans on competing in a couple Cactus Tour events at the end of the month and received word from Copper Rock Head Professional John Horton that she has been given an exemption to play in the Epson Tour’s Copper Rock Championship for the second consecutive year.

Stonebridge Professional Paul Phillips picked up where he left off last year with his strong play in Section events, winning the senior division by two points over reigning champion Doug Roberts.

Phillips holed out for eagle on his second hole of the day from about 100 yards on the par-four 10th hole at Bloomington. He would finish one-under for the day and 85 points for the championship.

In the super senior division, it was Bloomington Director of Golf Scott Brandt and Utah Sports Hall of Fame member Jay Don Blake finishing tied at the top with 82-total points.

And to round out the championship, Chip Garriss won the legend division with 79 points, four better than runner-up Larry Stubblefield.

Thank you to Chad Kartchner of RMT/EZGO and Jordan Bloxham of Under Armour for sponsoring the event and supporting the Utah Section. It was a week to remember and honor our dear friend Mike Stanger, who had been a big supporter of the Winter Classic for years.

The highlight of the week was gathering as a Utah PGA family to celebrate our 2021 award winners in the Awards Banquet and set off on the right foot for a new year after the Annual Meeting. 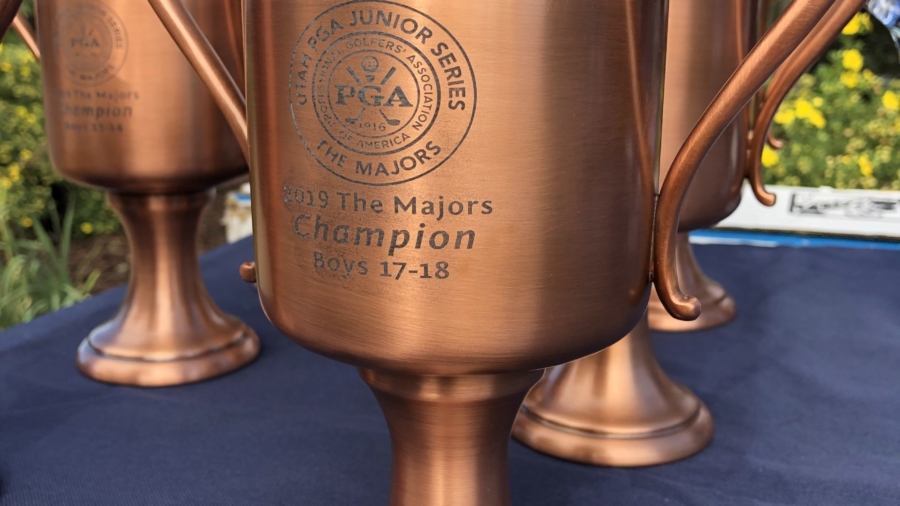 Over the past few years, we have seen a significant increase in junior golf. The Utah PGA is committed to creating a great experience for junior golfers to learn the game of golf as well as offer competitive events for golfers ages 4-18. Due to the demand, we will be expanding our program in order to create more opportunities for juniors wanting to participate in our events. The full Utah PGA Junior Series schedule including JET, Linkster and Itty Bitty events will be posted by February 15, 2022. Registration for these events will open March 1 at 9:00AM.

All members and non-members will be able to sign up for these events March 1, 2022 with the knowledge that they will have to have an established handicap meeting the requirement the day of the entry deadline. (Those deadlines are typically the week before the actual event) If you do not meet the requirement on that date, you will be issued a full refund and a player from the waiting list will be considered to take this spot.

How will you start to establish a handicap? This year your Utah PGA Junior Series membership fee will include a UGA membership card. You will be able to start establishing your handicap immediately once you start posting rounds this spring. Handicaps are updated frequently, so this will be fun for you to set goals and watch your handicap improve over the summer.

New to the Majors season is exemption spots into the Notah Begay Regional event at Glendale Golf Course on September 17-18. The winners of the Salt Lake City Major, Valley View Davis Major, Toeele County Major and Utah County Rumble will earn a spot to play. More information about the Notah Begah Jr. Golf National Championship can be found here.

Membership fees for the 2022 season will be $65 for ages 13-18 and $40 for ages 4-12. The UGA membership card is only included for the 13-18 age group. Membership for all ages allows members to sign up for events and a membership gift. Having a membership also gives you access to member pricing for the Majors.

Having an established handicap will only be required for those participating in the Major series.  We will still hold our one day 18-hole events for those who are not quite ready to play in the Majors, as well as those wanting to play in more events. Another new addition this year is that our  9-hole “B-Flight” in the 13-18 division will be for those who do not feel they can play 18 holes. Once your junior feels they are ready for 18 holes simply request to be moved to the “A-flight”.

We are looking forward to another great summer!