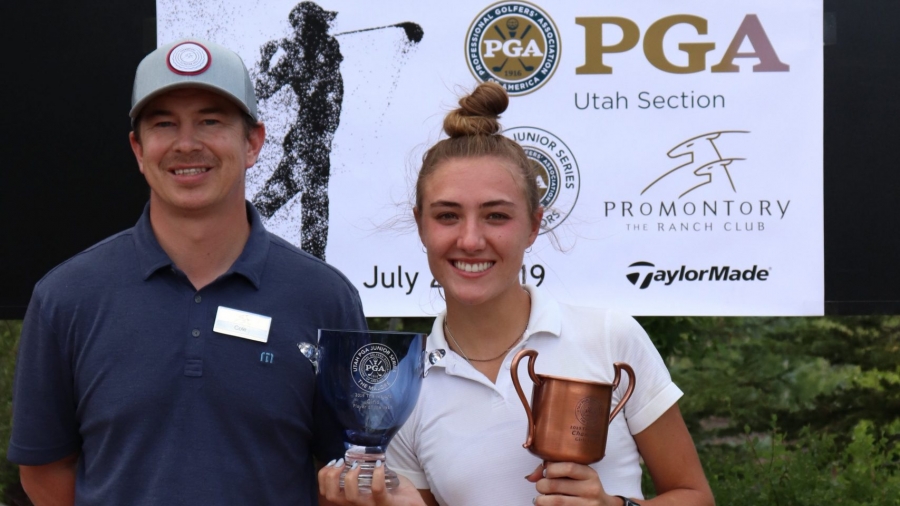 The 2019 Utah PGA Junior Series Major season has come to a close with an exciting finish at the Promontory PGA Junior Major Championship as Braxton Watts, Nathan Giles, Kyla Hoster and McKenzie Schow have earned exemptions into the 2019 Siegfried & Jensen Utah Open and Utah Women’s Open.

In Kyla Hoster’s case, she claimed the top spots in both categories. Hoster played in three of the four Majors and won the Davis/Valley View Major and the Promontory Championship. She won at the Pete Dye Promontory Course on July 29th with a (+7) 79, one-stroke over Ellie Hair’s 80, which gave left her in first place in points as well.

Hoster and McKenzie Schow were tied in the points race leading into the Promontory Championship, however, with Hoster finishing in first in both spots, the points exemption fell to the second-place spot. Schow’s points cushion was just enough to get that second spot into the 2019 Utah Women’s Open at Thanksgiving Point on August 5-6th with a third-place finish at Promontory.

“It’s a really proud moment for me,” Hoster said of qualifying for the third-ever Utah Women’s Open. “I know it’s a big tournament. I think it’s a big achievement.”

Braxton Watts of the Boys 17-18 Division must feel right at home at the Promontory PGA Junior Championship as he successfully defends his 2018 title this year with a tournament-low (-4) 68 on the Dye Course. Watts won the 2018 Promontory Championship played on the Nicklaus Course.

Not only did he defend his Promontory title, he also went back-to-back Major wins, winning the Gladstan/The Oaks Major to qualify for the season-ending major.

Accrediting his driver and “striping it” in almost every fairway, Watts qualified for the 2019 Siegfried & Jensen Utah Open at Riverside Country Club August 16-18th with an eight-stroke win.

“It means a lot,” Watts said of the Utah Open. “I’m really pumped to get out there and play Riverside. I didn’t get to play last year due to family, so I get to go play now, I’m excited.”

Claiming the second exemption spot into the Utah Open for the boys was Provo-resident Nathan Giles, who won the Boys Majors Points race by the skin of his teeth.

Giles trailed Landon Herndon in the points race by a slim margin going into Promontory but would leave with the lead by a mere five points with a score of 75, including birdies on three of his last four holes.

“It feels awesome, it’s actually my biggest goal this year to qualify for the Utah Open,” said Giles. “I’m super excited to play in it, and it’s my home course so it’s going to be fun.”

In the Boys 15-16 Division, Spencer Clayton went low with a (-2) 70 to take home the trophy. Clayton’s five birdies helped secure the win over second-place finisher Giles.

Kihei Akina, who won the Gladstan/The Oaks Major, shot an even-par 72 on the challenging Promontory Club course to win by three over Emmitt Harris.

To round out the Girl’s Divisions, The Romney sisters took control of the two younger flights. Savannah Romney won the Girls 15-16 Division with an 82 and Victoria Romney claimed the Girl’s 13-14 Division with a 79.

The two sisters will be playing for the same Corner Canyon High School Girls Golf Team as the summer season winds down. The 2019 Utah PGA Junior Series Major Season was our best season yet thanks to our Utah Section PGA Professionals hosting our membership at their great courses and for our ever-supportive and growing membership. We owe a big thank you to Promontory Director of Golf Ryan Kartchner and Head Professional Cole Carlson for hosting us at the Promontory Dye Course. What a great opportunity for our juniors!