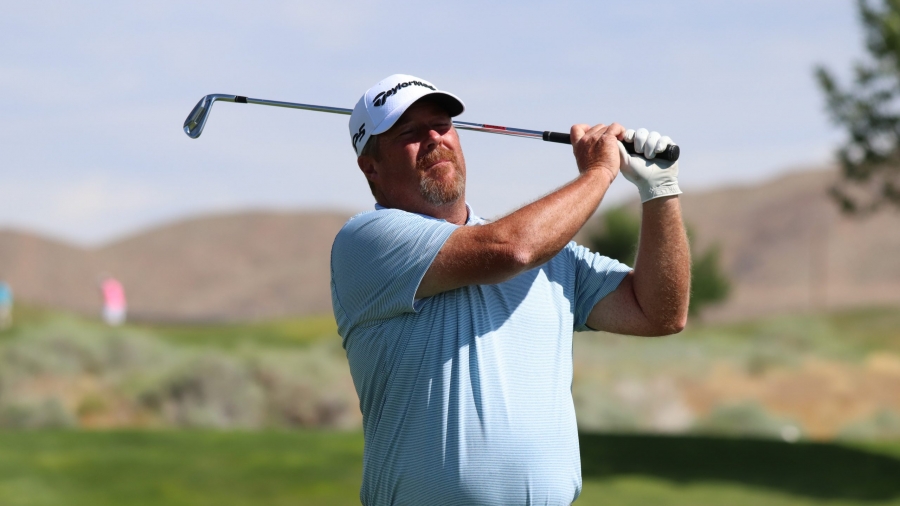 If you know Mark Owen, Mountain View Golf Course head professional, you know he’s a competitor. He played just about every sport growing up and he’s seen a lot of success locally as a golf professional in city opens and Utah Section events.

He’s got a new avenue for competition now that he’s reached the young age of 50 years old, which he rightfully claimed “the new 30.” Owen took advantage of the opportunity to compete in his first-ever Utah Senior Open at Toana Vista Golf Course in Wendover July 31st-August 1st and left as the champion.

The Utah Senior Open, which annually honors a Utah golf legend, this year being Riverside Country Club member Doug Marriott, is not an easy event to win. Some of the best golfers in Utah find themselves in this senior category, which makes for an extremely-competitive event.

Owen started hot with a bogey-free round of (-6) 66, providing a one-stroke lead over Steve Schneiter, a four-time Utah Senior Open champion, and Kirk Siddens (a), two overly-accomplished Utah golfers.

“I had a really easy round, didn’t even have a chance to make a bogey,” Owen said of the first round. “I made 6 birdies, no bogies.

“Today was a lot different,” Owen continued. “The wind was different, little harder, different pins, harder pins. I didn’t hit is as good, scraped it around for one over.”

A final-round one over was all he needed to claim the 2019 Doug Marriott Utah Senior Open. He slimmed by with a one-stroke overall victory over amateur Steve Poulson at (-4) 72-68. Schneiter finished second in the Professional Championship flight and tied for third overall at two-under.

“I knew my birthday fell a couple weeks before this event and I did pinpoint this as one of the events I would play in,” Owen continued. “All the guys I’ve looked up to for years have played in it. A couple honorees have played in it that are some of my really good friends and it’s just something I’m happy and excited to have my name attached to for now on, it’s cool.”

Owen has played in two events as a senior so far: the Brigham City Open and the Utah Senior Open. He’s two-for-two with wins.

Bruce Summerhays, a Utah Senior Open regular, not only won the Legends flight, reserved for golfers over 70, but also claimed the Super Senior flight with his ever-consistent play of (-3) 69-72.

With four birdies and an eagle in his first round, Summerhays held a one-stroke lead over past-champion and Bloomington Country Club Head Professional Scot Brandt. Summerhays would go on to seal his win with an even-par final round and leave Wendover with the Super Senior trophy. The Utah Senior Open is special event we look forward to every year, whether it’s celebrating the tournament honoree, spending time with Section members and Utah golfers throughout the state or joining forces with the Utah Golf Association. Thank you to all who support the event and a special thank you to our Wendover friends and to Toana Vista Golf Course and Staff.