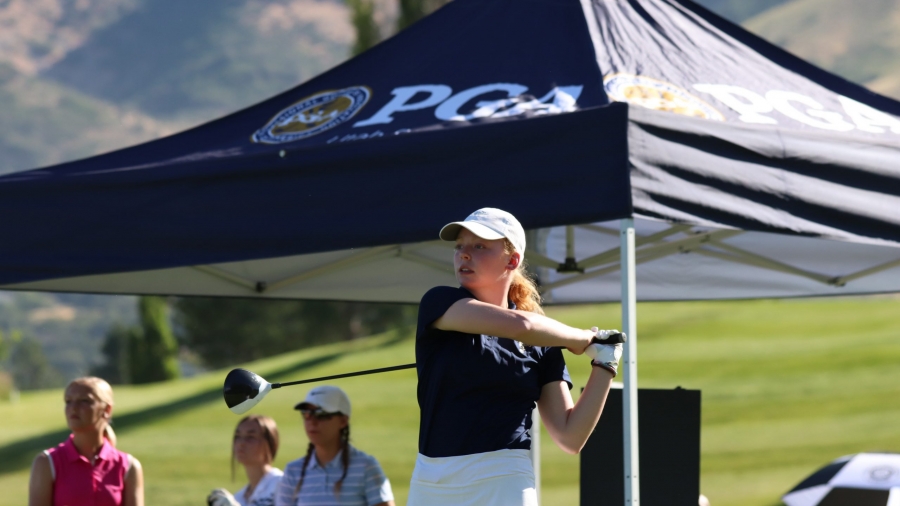 Six major champions were crowned at the Utah PGA Junior Series Davis/Valley View Major on July 10-11th at Davis Park Golf Course and Valley View Golf Course. With exemption spots into the season-ending Promontory Major Championship, scores were low, competition was tight and playoffs were needed in the second major of the season.

The lowest score of the tournament came from the youngest boy’s division. Emmitt Harris of the Boys 13-14 division held the lead after round one at Davis Park with a (-1) 70 and secured that lead the rest of the way by firing a (-4) 68 at Valley View in the final round.

With six birdies and only two bogies, Harris proved to be too good to catch and is now a Utah PGA Junior Series Major Champion.

If a 5-under two-day total score from a 14-year old wasn’t exciting enough for the Davis/Valley View Major, a playoff was needed to determine the winner of the Girl’s 17-18 division between Kyla Hoster and Mckienzie Schow.

Hoster grabbed the lead early by shooting a 69 at Davis Park, but steady play from Schow on day two led to a tie at (+4) 147 at the end of the final round at Valley View. After they tied the first playoff hole, the par-4 10th at Valley View, they continued to the par-5 11th.

“Yesterday it was putting and today was getting my approach shots close,” Hoster said about what was working well to get the win.

“It feels really good,” she said about the win and qualifying for Promontory. “It’s a relief, there was a lot of pressure. I feel very confident right now.”

The win put Hoster in first place on the Girls Major Points list, 20 points ahead of Schow going into next week’s Utah County Rumble Major at The Oaks and Gladstan Golf Courses.

Two exemption spots into the 2019 Utah Women’s Open are on the line for the winner at the Promontory Major Championship and the top spot on the season-long Girls Major Points list.

More low scores were made in the Boys 17-18 division as Porter Brackett started the event hot at Davis Park with a (-4) 67, providing a three-stroke lead going into the final round at Valley View over Landon Herndon.

Brackett would hold onto his lead on day two with a (+1) 73, finishing three-under for the major while Herndon maintained his second-place spot with rounds of 70-79.

“My putting is what saved me,” Bracket said.

The putter certainly made the difference as he drained four birdies and an eagle on day one to provide the cushion needed going into the final round.

With his win, Brackett will now compete for the exemption spot into the 2019 Utah Open by playing in the Promontory Major Championship. The winner at Promontory will earn his ticket to Riverside Country Club in Provo and the overall Major Point list winner will also earn an exemption.

Bracket currently sits in second on the points list behind Caysen Wright, who won the Boys 15-16 division at the Davis/Valley View Major with rounds of (-4) 68-71. Wright had a three-stroke leading going into the final round and held off a charging Jackson Rhees, who shot 69 at Valley View and Nathan Giles, who maintained his second-place spot with rounds of 71-73 after it was all said and done.

Wright, one of the few who shot under par at Valley View, matched all his bogies with birdies in the final round and was able to get one more to provide an extra cushion in his five-stroke win.

Claire Whisenant was able to mount a comeback-win with steady rounds of 75-77 to win the Girl’s 15-16 Division and punch her ticket to Promontory while Madalyn Hadley expanded on her 7-stroke first-round lead by shooting 82-83 to win the Girls 13-14 Division.

We’re lucky and fortunate to play on such championship-caliber courses like Davis Park and Valley View. A big thank you to Head Professionals Brad Stone and Dustin Volk and their staffs for being gracious hosts and for running the Davis/Valley View Major. Our third major of the season will be the Utah County Rumble Major at The Oaks and Gladstan Golf Courses. This will be the last opportunity to earn exemption into Promontory.