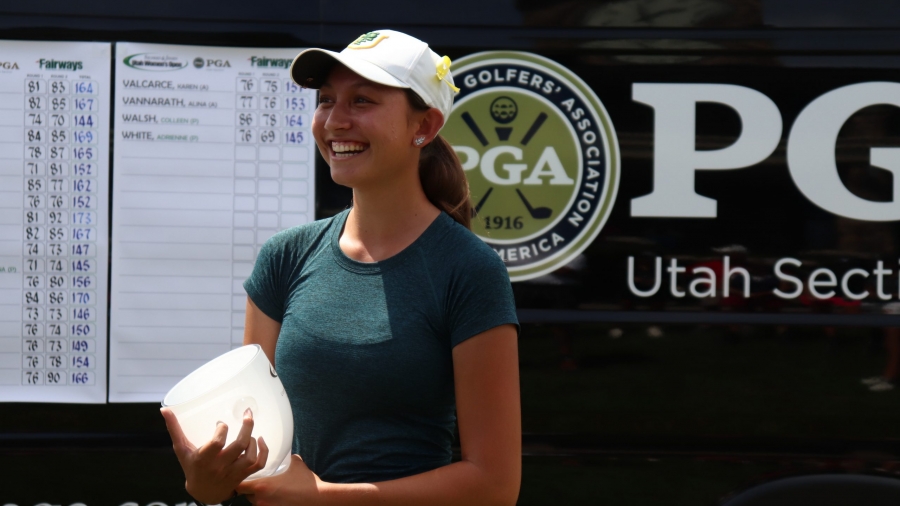 After Lea Garner won the first two events at East Bay Golf Course, no one knew what to expect this year with a larger field and different course, but Annika Borrelli, sophomore at the University of San Francisco came in, took the first-round lead with a (-5) 67 and never looked back with a final-round (-4) 68.

Borrelli had a one-stroke lead over Utah Women’s State Amateur champion and multiple-time winner on The Cactus Tour Sirene Blair and Utah PGA Junior Series alumnus Christiana Ciasca, who were both tied for second at (-4) 68.

And with two-time champion Garner only three-strokes back, Borrelli needed a solid final round to take home the trophy.

“I’ve been a first-round leader before,” Borrelli explained, “and it unfortunately usually gets to my head. This was the first time where I was just trying to play my game, go hole-by-hole, shot-by-shot.”

The game plan worked as she made the turn tied with Blair but then proceeded to fire off five back-nine birdies, including the last-two holes.

“Definitely my putting,” she said about what was working well. “I made some good putts and good saves. My dad and I had a great strategy going reading the lines and also the pace, I give a lot of credit to that.”

Before the Utah Women’s Open, Borelli had only played in one other Utah-based event, a college tournament down south in St. George. She enjoyed the experience and made sure to make a return visit during her summer schedule. And as for next year, she plans on defending her title in the 2020 Siegfried & Jensen Utah Women’s Open.

“Yeah, I’ll be back,” she said with a smile, holding the champion trophy.

As for the growing professional division, Blair took home the low-pro honors and check after close calls the last-two years.

“It feels really good,” Blair said about her low-pro honors. “I’ve had kind of a rough year so it’s kind of nice to have something that can boost my confidence.

“I definitely made a lot of putts today, I was grinding really hard on the greens and they have the greens rolling so nice. Nice and fast. Just pick a good line and put a good stroke on it and it’ll go in.”

Blair made the turn at one-under for the day, tied with Borrelli, although she finished the back nine in 36, it was good enough for the $2,500 low-pro payout.

“I don’t know what it is about this event,” she said about her performance in the first-three events. “It’s just run really smoothly. The girls are great, a lot of them I played junior golf with so it’s good to see familiar faces. Everyone plays well typically, everyone goes low and the courses are set up to score so it’s always fun to see and fun to play.”

In only its third year, the Utah Women’s Open continues to grow and become a crucial stop in the women’s schedule for Utah golf and for several traveling professionals. We owe a big thank you to the title sponsor Siegfried & Jensen for supporting it each year and for our presenting sponsor Fairways Media for supporting women’s golf in Utah.

Another thank you to Thanksgiving Point Head Professional Tele Wightman and Superintendent Jason Robert and their staff for hosting us this year. The course was in excellent shape and provided a true test for the Utah Women’s Open.