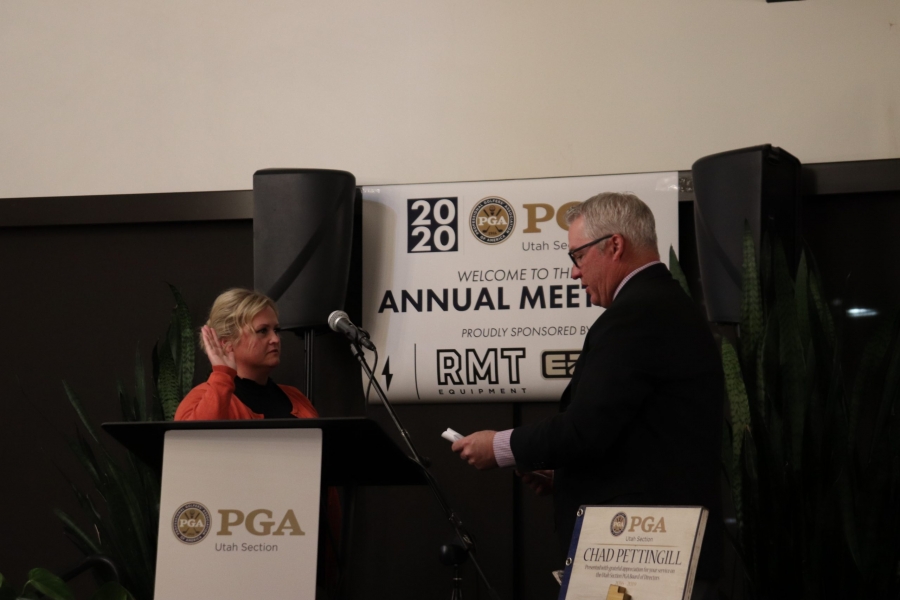 It’s tradition for the Utah Section PGA to host the Annual Meeting, Utah PGA Awards Banquet and the Winter Classic Championship during the same week. It’s a great way to start the new season. This year was special with the swearing in of Darci Olsen as the first woman board member in Section history and with the surprise announcement of Salt Lake City’s ABC 4 News Sports Director Wesley Ruff as the first honorary member of the Section.

“I am just grateful for the opportunity, grateful to get voted in to be on the board and have a voice,” Olsen said. “I’ve had really good support from the fellow women in the Section and you know, it’s funny, until it was made a bigger announcement at the Annual Meeting when I was getting sworn in, it didn’t hit me until then that I am the first-ever woman on the board.

“Sometimes I’m just ‘one of the guys,’” Olsen continued. “I’m part of the Section, I’m a PGA member, so sometimes I don’t think about it that way. But when they announced me as the first-ever woman on the bard, I just felt so proud.”

Olsen also received the Bill Strausbaugh award at the Awards Banquet in February and in the past has been awarded Merchandiser of the Year (public) in 2012 and Women’s Player of the Year in 2018.

“Hopefully I can be a good leader and someone to pave the way for some of the younger women up and coming. It just makes me feel a sense of responsibility. I was the first-ever Women’s Player of the Year and the first Section champion for women, so now being on the board, it never really dawned on me that we’ve never had a woman on the board.

“We need the presence and women need to be involved and feel welcome to come to all the events and meetings and feel like we have a voice. I think it’s going to make a turn, it’s hard for some of the ladies at this stage of their life with young kids to come to events, it’s just a little bit different for women. So hopefully as time goes we’ll have a lot more participation, we’ll have a lot more women that want to serve and want to be involved. Hopefully me being on there they can realize that there is a spot for them.”

Another first for the Utah Section was naming Ruff, who has proudly covered Utah’s amateur and professional golf for over three decades, as the first-ever Utah PGA honorary member.

Ruff was fulfilling his usual emcee role at the Awards Banquet when Executive Director Devin Dehlin stepped up to the podium for a brief announcement, completely surprising Ruff with his honorary membership.

“Well I was overwhelmed, floored, flabbergasted, all of it. I am honored beyond belief, flattered that they would think of me. Just stunned,” Ruff said.

“I’ve been in the market for 35 years,” Ruff said. “I was here about the time they went from the Rocky Mountain Section to the new Utah Section. It means the world, because these are people I have been around for 35 years. Golf people are the best people. Of all the sports I cover, golfers are the best. To be included and a part of that family, it’s awesome.”

Ruff grew up in Springville, Utah, where golf has been a major part of his life from a young age. He has continually showed his support for the Section and the PGA Professionals in Utah by covering events and tournaments throughout his career, and many fond memories have come from it.

“I was in Wendover when they first started having the Utah Section Championship out there, meeting Jeff Beaudry when he first got started, and obviously, the work we did with the Ben Hogan Tour and the Nike Tour and of course being there when Special Olympics got its start in golf. I was a part of that clinic on the driving range at Riverside Country Club.

“Covering some of the Section guys back then like Milan Swilor, who would just tear it up on the Nike tour at Riverside and in the Utah Section. There are so many good people, just the best. You know, meeting Bob Bentley and Bruce Summerhays. It’s been a great ride.

“And to be the first,” he said. “that means so much to have that happen to me. I just look at myself as a dopy kid from Springville that likes to play golf.  Suddenly I get the chance to rub elbows with people in the Section and get to emcee some banquets, hang with them and play in some events. Now to be an honorary member I could not script that any better, it’s been awesome.”

The Utah Section PGA is proud and grateful to have Olsen as a board member and Ruff as an honorary member. The impact the two of these individuals have had on the Section and on golf in Utah is irreplaceable. Thank you for everything!