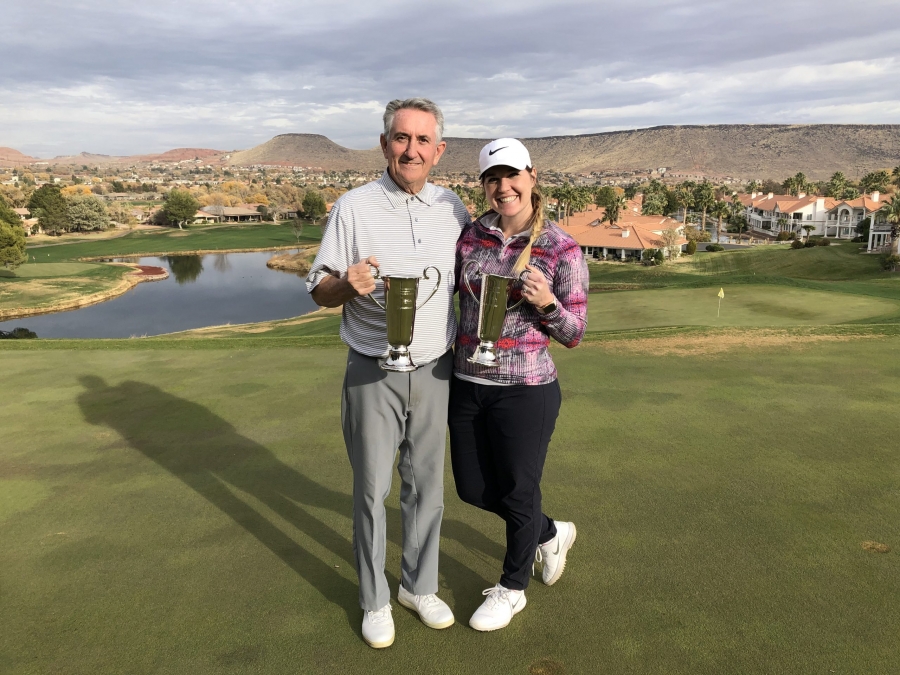 There is a first time for everything, and for The Country Club’s Wayne Fisher and Haley Dunn-Sturgeon it was the theme for their 2019 Utah Section PGA Pro-Assistant Championship victory on November 18-19 at Bloomington Country Club and Sunbrook Golf Club.

“I am ecstatic,” Fisher said about the win. “I’ve heard so much about how she (Sturgeon) plays. This is actually our first time playing together. We came down not knowing how each of us played. I got to watch her and play Bloomington for the very-first time ever, so it’s been a couple days of firsts.”

Fisher and Sturgeon got off to a quick start at Bloomington in the first round with a (-12) 60. At one point, starting on the 13th hole in the shotgun start, The Country Club duo birdied seven holes in-a-row.

Sturgeon shot a career-low (-9) 63 on her own ball in the Fourball format, maintaining her good play from the Utah Section Women’s Match Play Championship.

“Putting, I made putts from everywhere,” Sturgeon said. “I was striking the ball well, putting well and to shoot 63, it was incredible. Career low, first bogey-free round, a lot of firsts down here.”

“I think the country club is going to be ecstatic,” Fisher continued. “This is above and beyond, we’ve talked about coming down. I used to come down with Mr. Branca, but it’s been quite a few years so it’s nice to represent TaylorMade because TaylorMade has been fantastic to me over the years so I’m thrilled that I get to represent this.”

Fisher and Sturgeon shot a second-round (-4) 68 for a 128-tournament total, which barely outlasted the charging Bloomington team of Scott Brandt and Jed Wright, who shot a final round (-10) 62 to finish one-stroke back at 129.

“We just ham-and-egged it,” said Hamill. “James made a couple of good putts on our last few holes and got it done.”

“We didn’t make too many mistakes at the same time,” Hood added “We saved ourselves on a couple of holes and took advantage of some good shots.”

We owe Phil Deimling of TaylorMade and Jeff Smith of Adidas a huge thank you for supporting the Section in being sponsors of this year’s Pro-Assistant Championship. They treat our membership well and we’re lucky to have them.

Another thank you goes to Bloomington Country Club and Sunbrook Golf Club for allowing us to use their facilities and play their courses. It was a fitting end to a great year of tournaments.