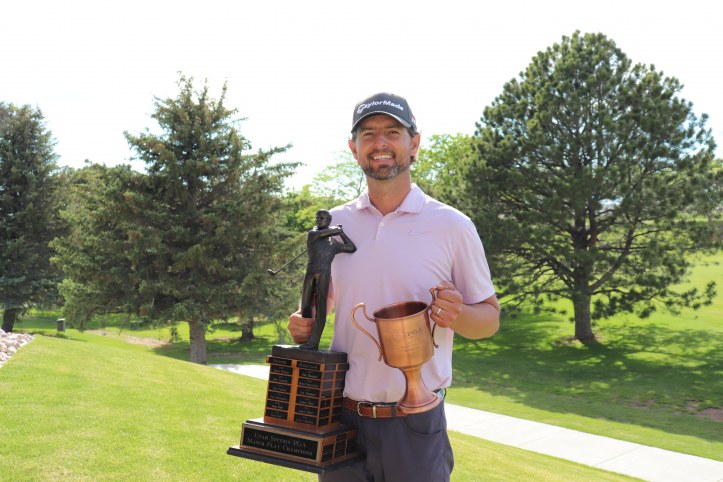 There are many that will be shocked to hear that Zach Johnson, Davis Park Golf Course assistant professional and reigning Utah Section Omega Player of the Year, had never won a Utah Section Match Play Championship, until now.

Five matches and an eagle chip later, here we are. The 2019 Utah Section PGA Match Play title belongs to a familiar name the rest of the year.

“This one feels great, I don’t think I’ve ever won a match play event,” Johnson said. “History repeats itself, I’ve been a terrible match play player. I’ve been close but never won and every year I sit and think ‘this might be the year’ but to finally win and get the trophy, this one means a lot.”

The process wasn’t as smooth as one would hope with facing a rain-delayed event and five competitors with games worthy of the Match Play trophy in Sadie Palmer, defending champion Chris Moody, Jacob Holt, Pete stone and Casey Fowles. However, Johnson took full advantage of the two-week delay due to weather.

“The weather back in May was a benefit for me because right before the Rose Park Open I hurt my hand,” Johnson explained. “I played in the qualifying round and first match before we got rained out with a pretty painful hand injury. I was trying to make it work but once we got rained out it gave it some time to heal up. The hand still hurts a little bit but it feels better now than in May. If we were to have to play 54 holes back in May, in the cold, I don’t think I would’ve been able to finish.”

“I played poorly, didn’t play great in the qualifying round so I got a middle-of-the-row seed, 16 seed, and had a tough first round match facing Sadie; we had a good match,” Johnson said. “That next morning to get the defending champ, if you look at this trophy his name is plastered all over it. It’s nice a draw, one match in, play against Moody, get thrown in the wood chipper and hope for next year. But that match, both of us would agree the golf wasn’t great but I lucked out and got the victory.”

If the injured hand, rain delay and facing the defending champion wasn’t enough drama for one tournament, the 18th hole of the championship match against Fowles spruced things up even more.

Johnson was in good position on 18 green with a 20-foot birdie putt, tied with Fowles in the championship match. The match had been back and forth the whole way through, but Fowles found some tree trouble off the tee and on his approach. He was left with a green-side chip for par while Johnson overlooked a winning birdie try.

Fowles then proceeded to chip in for par, which would force an extra hole while Johnson two putted to tie the hole.

“Talk about a change of emotion in a hurry,” Johnson said. “I even told him, ‘chip this one in Case.’ I kind of had the feeling it would go in. You think you’ve seen it all in golf, especially match play, as soon as you think you’ve got a hole won, reality changes in a hurry.”

The playoff hole was played on the par-five first hole at Hubbard. After both drives found the fairway, Johnson blocked his second shot hole-high, right of the green, leaving himself a downhill chip with a tree in between his ball and the cup. Fowles was left with a 40-foot putt for eagle behind the hole.

“I took a gap wedge and made sure to keep it low under the tree limps, had to land it in the rough and let it run out.” Johnson explained. “Casey said he had the same feeling I did on the 18th hole when I knew he was going to chip in. This one wasn’t one you would expect to chip in. The ball landed in the ruff, released heading right towards the flag with a little bit of pace, I was telling it to bight but it crashed the middle of the flag and dropped. Casey hit an incredible put but left it a few inches short.”

Back-to-back chip-ins, one to extend the match from Fowles and one to end it from Johnson with an eagle.

In the longest championship match in Utah Section History, going 19 holes, it couldn’t have ended in a more unexpected and exciting way.

As for the Utah Section Senior Match Play Championship, the rain-delay threw a loop in some schedules. Terry Outzen and Steve Schneiter played their championship match Friday, July 31st at the Salt Lake City Country Club where Schneiter defeated Outzen 3 & 2 to claim the championship.

Thank you to all who played in the 2019 Utah Section Match Play Championships and to our sponsors VLCM and Cutter & Buck for supporting us. As always, a thank you to Tony Angelico, Shawn Edwards and the whole Hubbard Golf Course staff for being gracious hosts for this year’s championship.